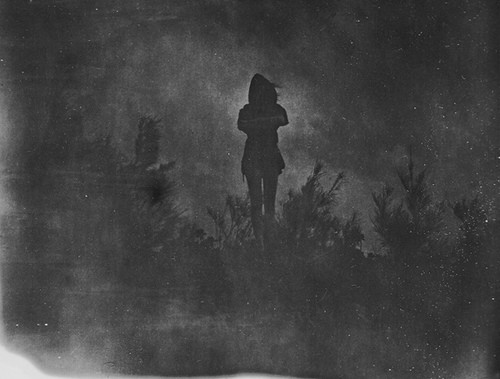 I was engrossed by the headline.  A child had found her own biological mother years after being stolen from her hospital bed at just a few days of age.  The thief was never caught – and the child was never recovered…until recently.  How could  this happen?  As the child grew older, she just had this feeling that “she didn’t belong with the family raising her.”

Ever had the feeling you that you didn’t belong where you were? Felt like you were meant for something so much better?  You were!  Just like in the article above – this place we call home – it really isn’t our home!   Designed to be born into God’s Kingdom of love, instead, we were given over to satan’s kingdom at birth because of Adam and Eve’s choices:

Rom 5:19 tells us that “by the one man’s disobedience the many were made [members of satan’s kingdom].”

I know.  I have often struggled with that verse as well.  We would like to say, “But I never made that choice!  How can I be held accountable – even guilty – for a choice somebody else made?”  Apparently, good ol’ American values don’t line up with those of the rest of the universe!  God – and satan – think generationally.  Always have.  But, there is good news too!

Romans 5:15 “But the free gift is not like the trespass…  For if, because of one man’s trespass, death reigned through that one man, much more will those who receive the abundance of grace and the free gift of righteousness reign in life through the one man Jesus Christ…Therefore, as one trespass led to condemnation for all men, so one act of righteousness leads to justification and life for all men.  For as by the one man’s disobedience the many were made sinners, so by the one man’s obedience the many will be made righteous.”

There are times where generational consequences don’t do us any favors.  Satan knew if he could win my paternal grandpa over with alcohol, and have him die from a swimming accident due to his drunkenness, then that blow would sink the rest of his family for generations.  Indeed!  Furthermore, if he could do the double whammy of getting my other grandfather to be abusive to his family, then become an absent father, and then commit suicide after terrorizing his family, surely satan would put that family into a tailspin from which they could never recover, right?   Except God.

Ephesians 2:1-3, “And you were dead in the trespasses and sins in which you once walked, following the course of this world, following the prince of the power of the air, the spirit that is now at work in the sons of disobedience—3 among whom we all once lived in  the passions of our flesh, carrying out the desires of the body and the mind, and were by nature children of wrath, like the rest of mankind…”

This is my favorite part of the passage…

“But God, being rich in mercy, because of the great love with which he loved us, 5 even when we were dead in our trespasses, made us alive together with Christ—by grace you have been saved—6 and raised us up with him and seated us with him in the heavenly places in Christ Jesus, 7 so that in the coming ages he might show the immeasurable riches of his grace in kindness toward us in Christ Jesus…”

So here is my question:  How many leaders do you know who are willing to “show the immeasurable riches of his grace in kindness toward us”? Drawn by God’s amazing grace, we were born into the household of God.  Now, you can tell a lot about a King, by looking at their kingdom.  The picture below is a fine collection of some of this world’s most powerful dictators in this century, along with a measure of the health of their fine kingdom. 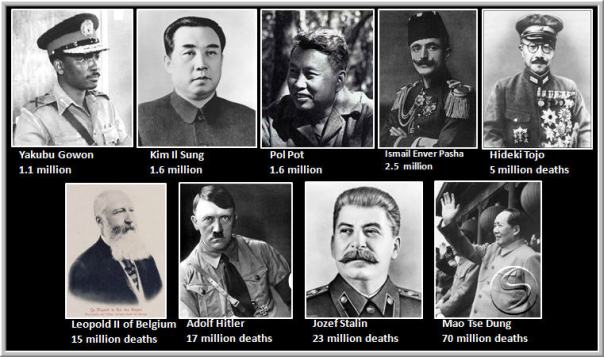 The numbers under their name  represent the number of people killed under their regime and with their blessing.  Why?  They didn’t think exactly  the same way as their leader.  Some were caught sneaking into the kingdom.  Others (most) were caught trying to sneak out. Then there were those who dared to have a different skin color, or religious (or athiestic) beliefs, or culture.  Penalty for any of these great acts of disobedience?  Death.  The above passage in Ephesians was exactly correct!  Those people were children of wrath, dead in their trespasses in their respective kingdoms – just as we are if we are in satan’s kingdom.  But God…

Now of course, there is always the criminal element as well.  What do you do with murderers and rapists, thieves and violent types?  Well, let’s take a look at the “law” book that governs God’s Kingdom:

1 Corinthians 6:9, “…do you not know that the unrighteous will not inherit the kingdom of God?  Do not be deceived:  neither the sexually immoral, nor idolaters, nor adulterers, nor men who practice homosexuality, 10 nor thieves, nor the greedy, nor  drunkards, nor revilers, nor swindlers will inherit the kingdom of God.  11 And such were some of you.  But you were washed, you were sanctified, you were justified in the name of the Lord Jesus Christ and by the Spirit of our God.”

Who is your daddy?  In whose kingdom do you belong?  If we have given our life to Jesus, then the answer is simple.  Do you know Him?

Our true citizenship is in heaven.  That might explain a few things!

And again Jesus confirms this in John 17:14,

Hebrews 13:14 “For here we have no lasting city, but we seek the city that is to come.”

Here is what is awesome…are you ready for this?  Because we are members of God’s Kingdom, we are here on this earth as ambassadors.

2 Corinthians 5:20, “Therefore, we are ambassadors for Christ, God making his appeal through us…”

Legally, ambassadors are not under the law of the land they are in – they are governed under the law of their citizenship. Do you understand what that means for us?  Everywhere we set our foot, we represent the grace and kindness of our God.  We EMBODY the grace and kindness of our God.  Every where we walk, every person we talk to, God makes His appeal through us.

And what is His appeal?  Earlier on, He tells in verse 18 that “Christ reconciled us to himself and gave us the ministry of reconciliation…”

We truly do not belong in this place.  But while we are here, we live for Christ.  We are not home…yet…

Posted in Not Home Yet